It was a weekend of stakes races, trials and a big derby day at The Horses At Evergreen Park.

Biggest race of the weekend was the J.D.A. Grande Prairie Derby on Sunday.

And it stayed Grande Prairie! 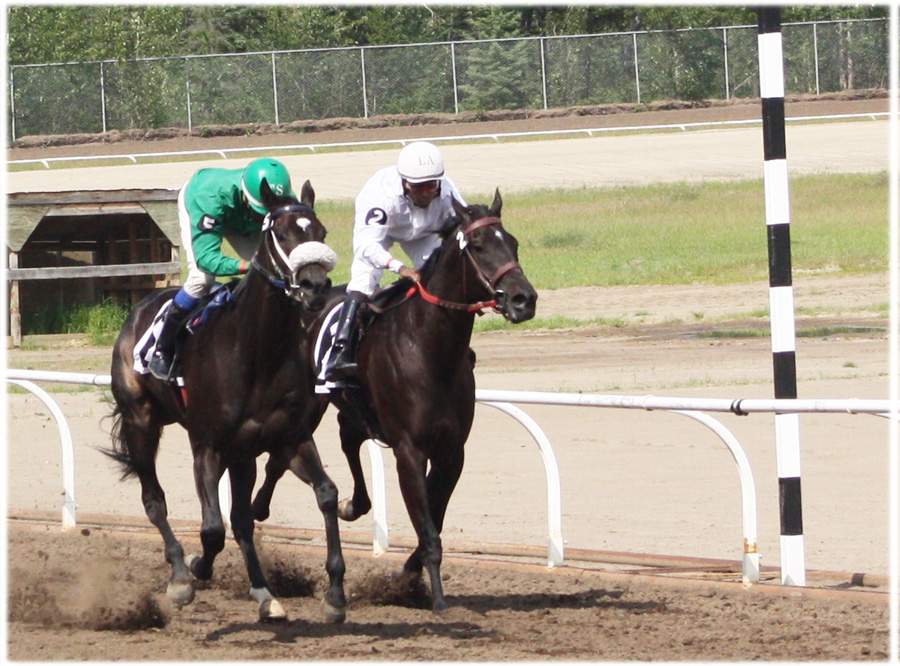 The Hybrid, co-owned by locals Jason and Kelsey Coney and trained by Jason, out-raced four others in the one mile run taking home $7,287 of the $13,750 purse, a trophy and a nice blanket presented by sponsor Jarvis Dawson of J.D.A. Oilfield Hauling.

Azee Rules was initially named runner-up after battling The Hybrid to the wire, but a complaint was laid and upheld. Anello was placed second with Azee Rules third followed by Irish Era and Pretalk. Pretalk is owned and trained by Beaverlodge's Jack Bolin.

Trevor Smith, the third leading jockey heading into the weekend, was in the saddle on the winner.

While the biggest, the JDA Grande Prairie Derby wasn't the only important race on the weekend.

And jockey Blanford Stewart was in the saddle for three of them on Saturday.

He finished up the night guiding Teague Eleven to first in the first race of the mile-long Marathon Series. That horse is trained by Nellie Pigeau and owned by Payton Pigeau. Second of three Marathon Series races is July 27.

Papas Coleen won the first one with Trevor Simpson in the saddle. The horse is trained by Grande Prairie's Darcy Hawkes and owned by Donalda Cochrane of Fort St. John.

Singles Cruise, owned by Janice and Barry Sather of Beaverlodge, was favored in that race, but was scratched with a foot abscess.

In the second Adequan Derby Challenge Trials race You Have No Equals was the winner with Dwight Lewis in the saddle. Both races were over 400 yards with a purse of $4,000.

The Adequan Derby Challenge final is on July 28.

Race 1 of the Distaff Series was held Sunday with Silent Auction and jockey Orlando Foster, taking first in the 5 1/2 furlongs run for $7,000 in prize money. Race 2 goes July 28 and finale August 18.

This coming weekend ishighlight with the first Weiner Dog Derby and a hot dog eating contest on Sunday the 21st.

The Horses At Evergreen Park continues weekend until August 25.